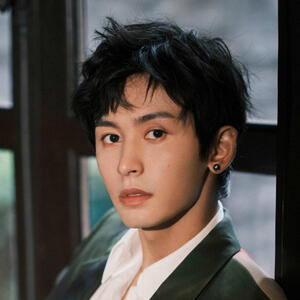 A guide to what happened to Chinese actor zhang zhehan during and after august 13, 2021.

December 16, 2021: What's On Weibo: Cyber Bullying and Fake News: What You Should Know About the Zhang Zhehan Story

TeddyFoxFluff: Clarifications Part 4: The Nazi Gesture and Other Rumors

potteresque-ire: My Thoughts on Zhang’s Incident, Part B: TIMELINE OF EVENTS

A timeline of what happened during and after August 13th, including the start of the Justice of the People campaign started by Li Xuezheng on November 27th. CN-ENG translations by the listed translators, with additional information from TeddyFoxFluff's clarification blog.

August 12, 2021 (late evening) to August 13, 2021 (early morning) - Old photographs of Zhang Zhehan visiting Japan began circulating on Chinese social media platforms. The two photo sets that attracted the most attention were (1) photos of him unintentionally posing in the park compound surrounding the Yasukuni shrine on a tourist trip to Japan (these were posted to his Weibo and Instagram accounts in 2018), and (2) photos of him attending a friend's wedding in 2019 at the Nogi Shrine (乃木神社) in Japan. 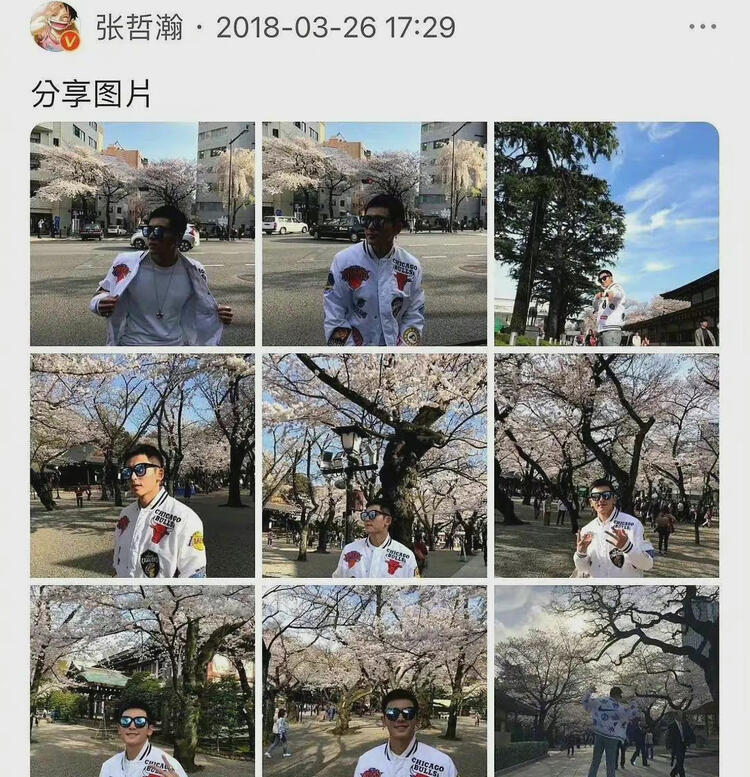 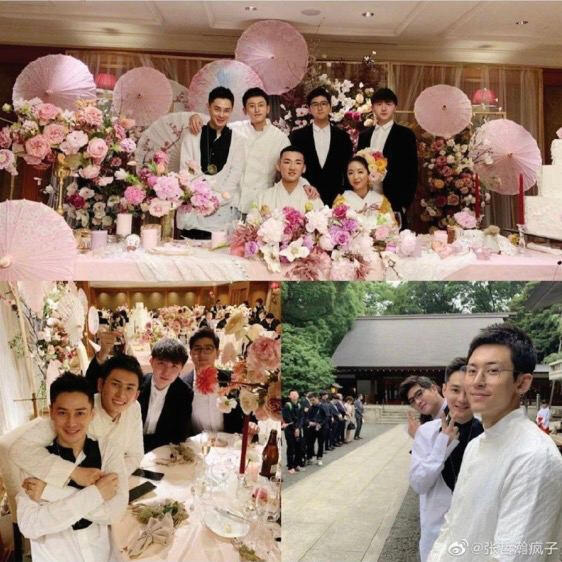 August 12, 2021 - Zhang Zhehan's friend, whose wedding he attended in the photos above, issued a public apology for not checking the background of the wedding venue.

August 13, 2021 (1:39PM GMT+8) - Zhang Zhehan apologized for his ignorance through a formal letter posted to his Weibo. He stated he was not pro-Japanese and that he loved his own country. 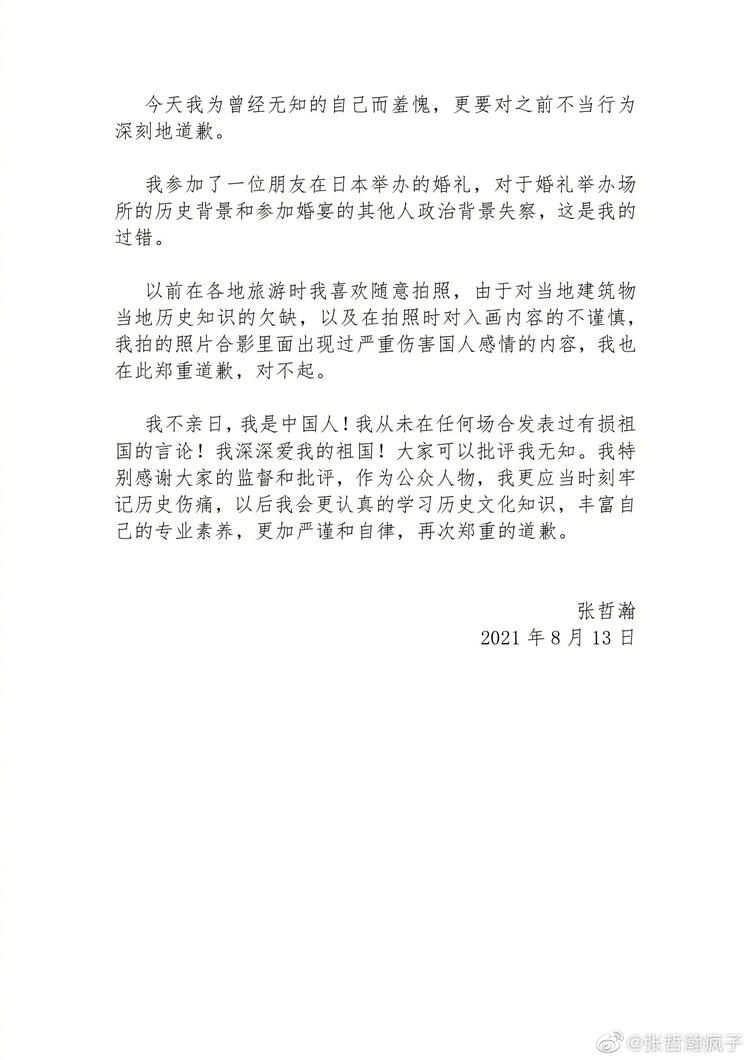 August 13, 2021 (4:39PM GMT+8) - The People’s Daily (人民日報), an official newspaper of the Central Committee of the Chinese Communist Party, posted a statement on Weibo which chastised him for Zhang Zhehan ignorance and stressed the importance of knowing their history. Weibo linkZhang Zhehan reposted this to his own account and stated that he accepted the criticism. 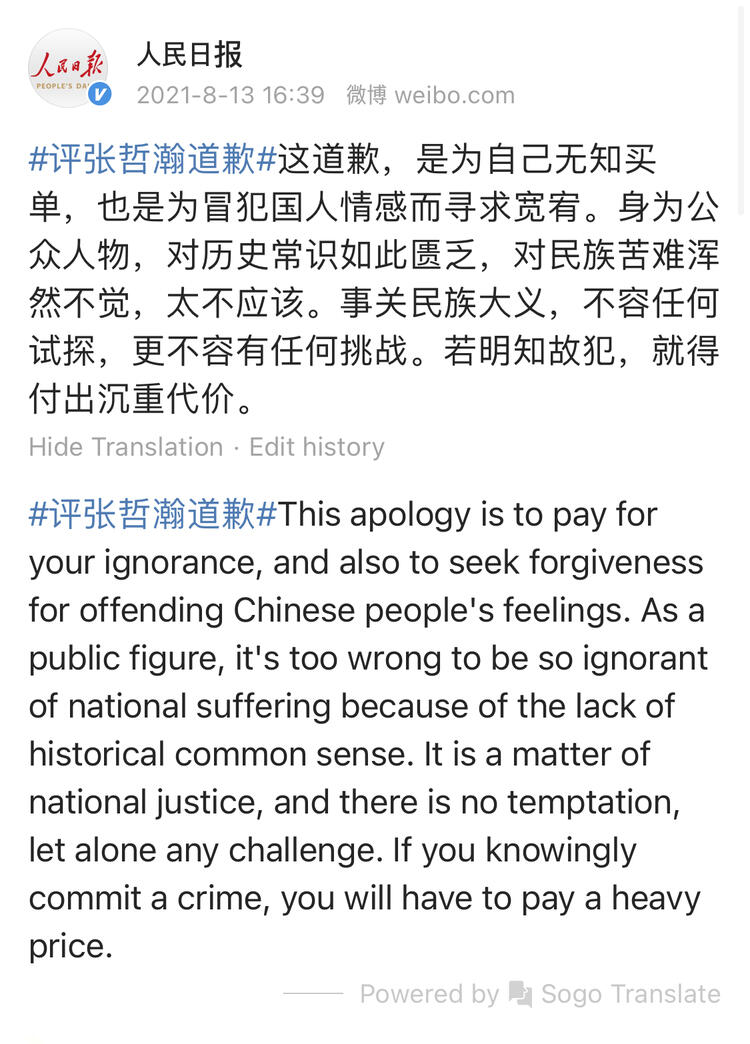 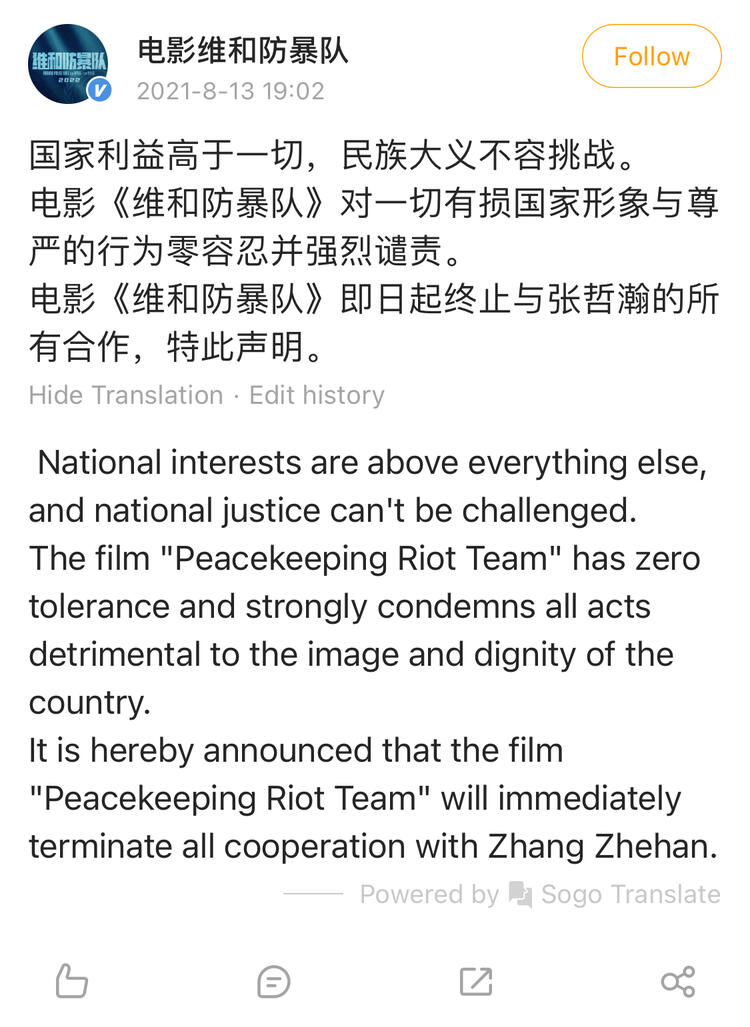 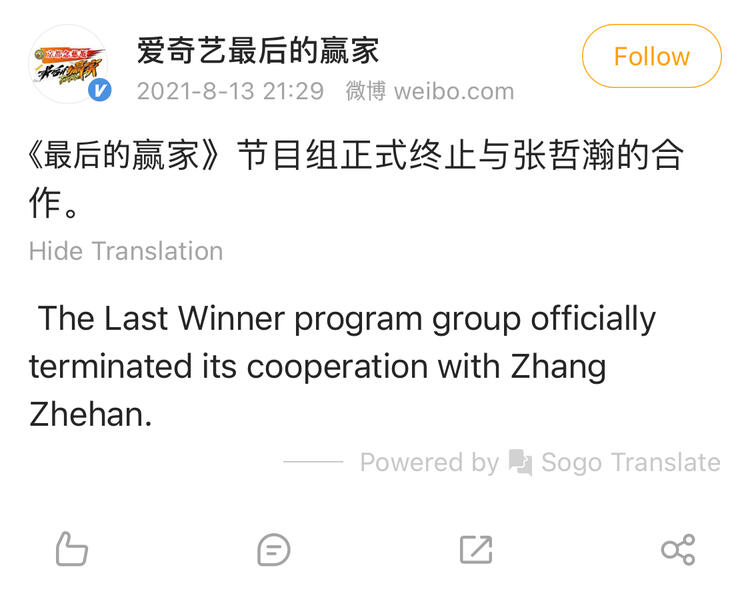 August 13, 2021 (5:35PM GMT+8) - Zhang Zhehan responded to People’s Daily’s critique, stating he shall repent and learn his lesson, and that as a Chinese, he loves his country and the CCP.Translation
Article source 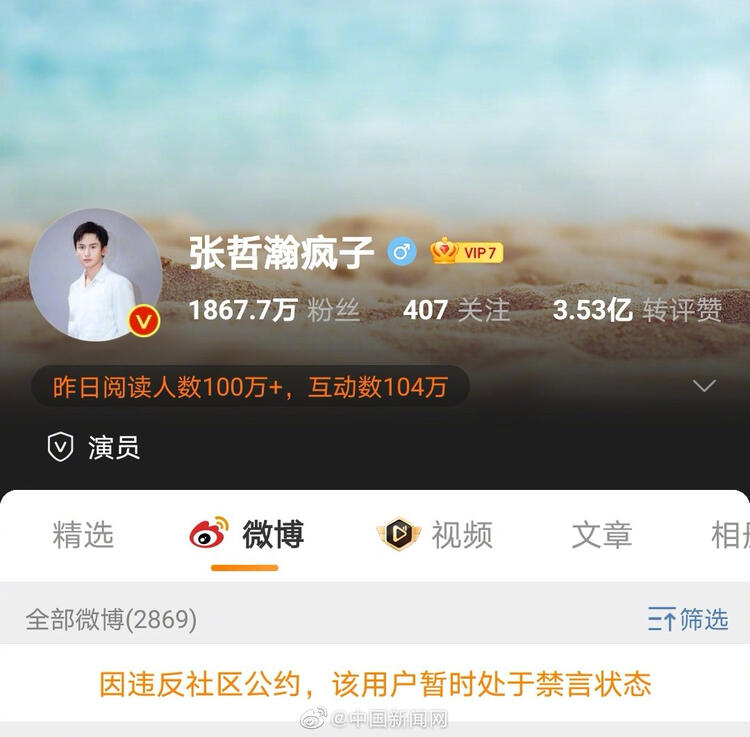 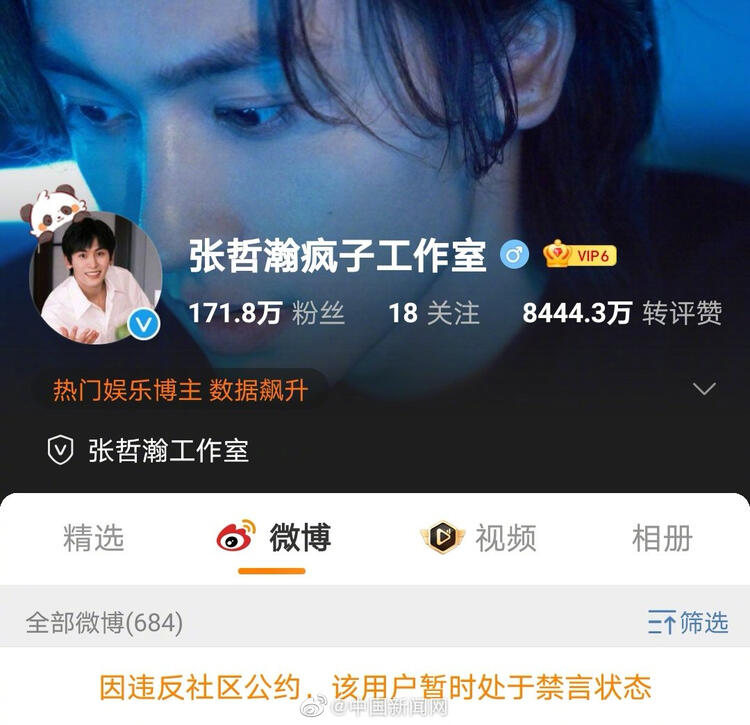 August 15, 2021 - The China Association of Performing Arts (hereafter CAPA), a non-profit organization managed directly by industry volunteers, posted an announcement which called for the boycotting of Zhang Zhehan, effectively preventing him from holding live or stage performances. CAPA's August 15 statement was the first to use the term 參觀 ("visit") when referring to Zhang Zhehan. After the letter was shared, other media began to use 參觀 and even 參拜 ("pray"). Weibo link 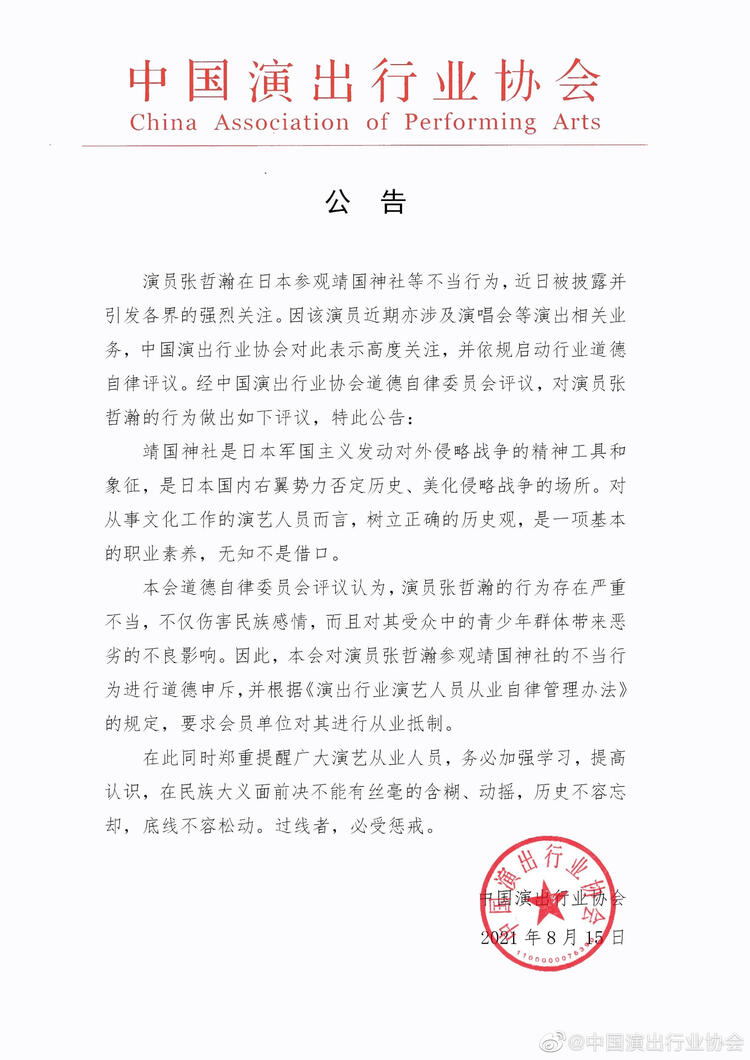 August 15, 2021 - Weibo closed Zhang Zhehan’s account (which had more than 18 million followers), his studio’s account, and his Super Topic, on the grounds that he had hurt the national sentiment and created a negative influence on youths. Weibo link

August 20, 2021 - The drama Demon Girl starring Zhang Zhehan was removed from the shelves on August 17. His other social media accounts like Douyin were shut down, and platforms like Douban, Station B, iQIYI, QQ Music, NetEase Cloud Music, Taobao, and JD removed his content from their servers.

October 9, 2021 - On October 11, a Weibo user wrote to the Ministry of Culture and Tourism (hereafter MCT) asking about a banned entertainers list using the Chinese version of the Freedom of Information Act. The MCT responded, stating that they did not create a list of problematic artists in 2021: Weibo link 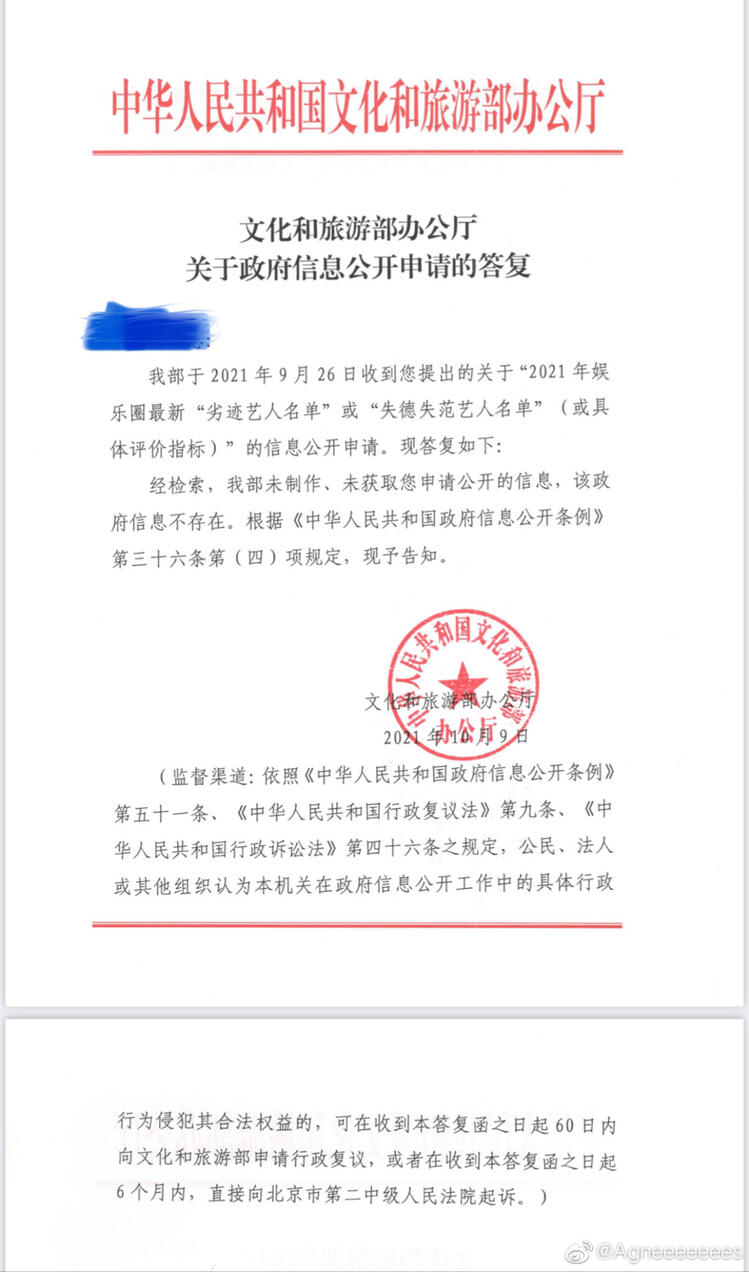 October 22, 2021 - The National Radio and Television Administration (hereafter NRTA) stated in their NRTA Notice 122 that they did not create a list of problematic artists (no year was specified): Weibo link 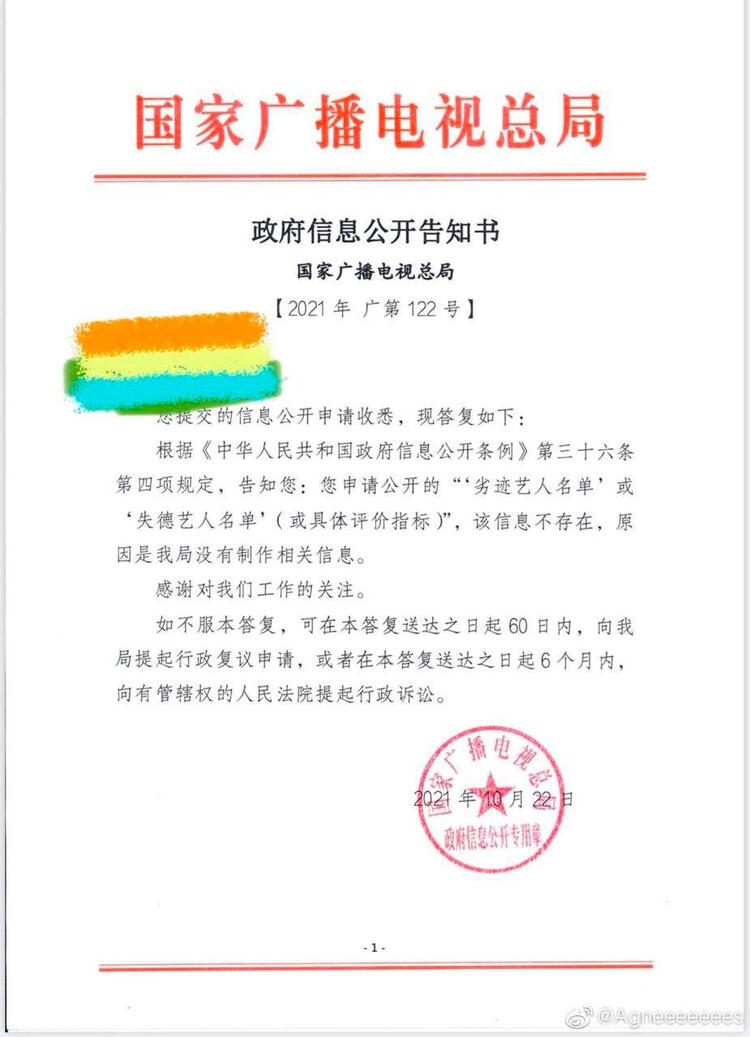 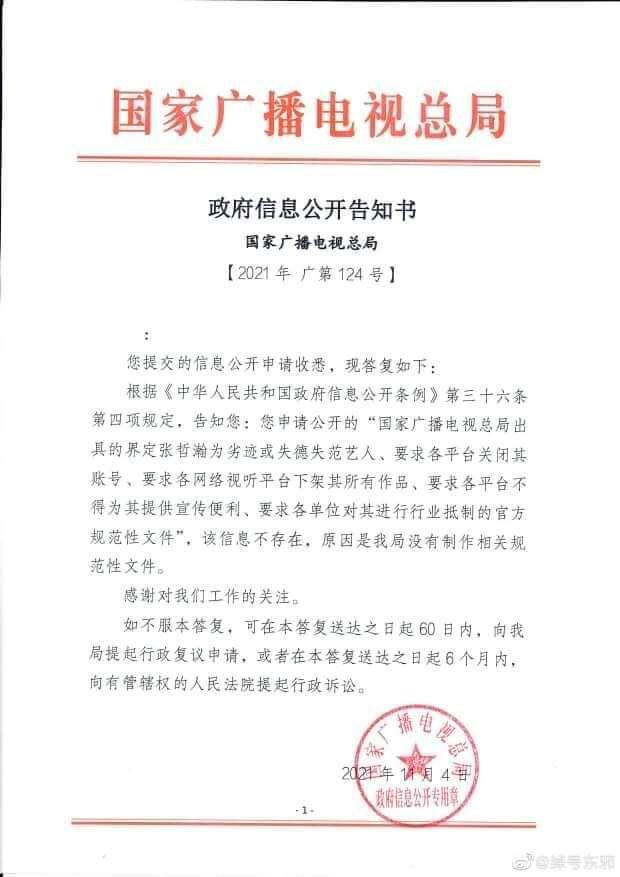 November 17, 2021 - MCT did not create any official documents (1) classifying Zhang Zhehan as a problematic artist, (2) asking for the Word of Honor concert to be taken down, (3) asking MCT departments to participate in an industry boycott of Zhang Zhehan. link 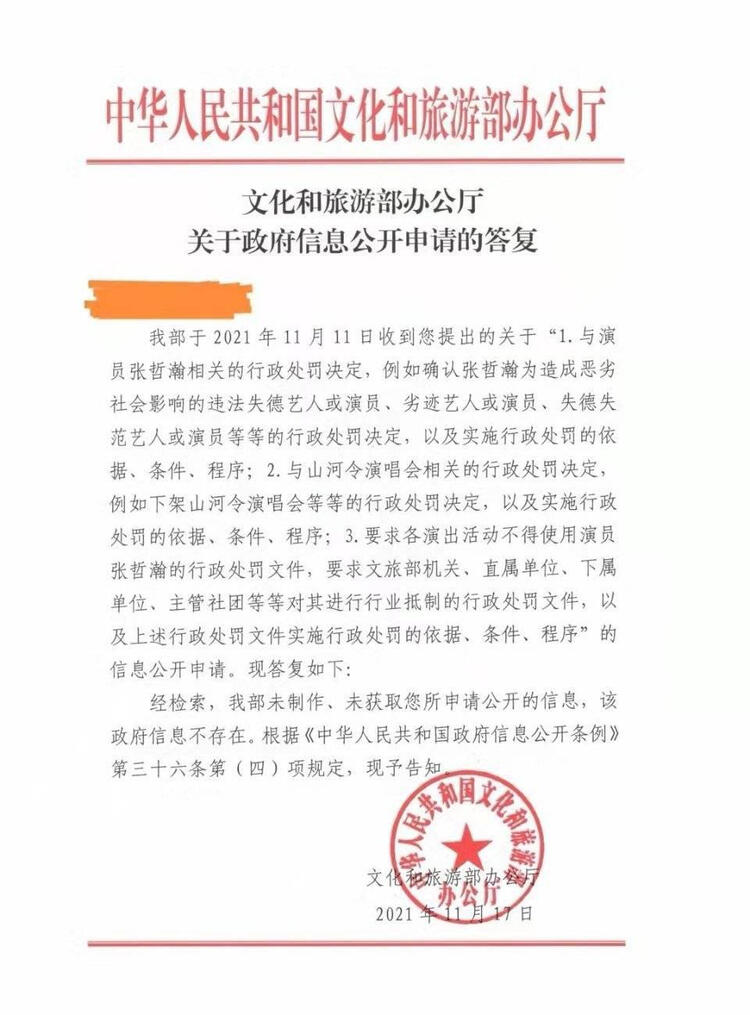 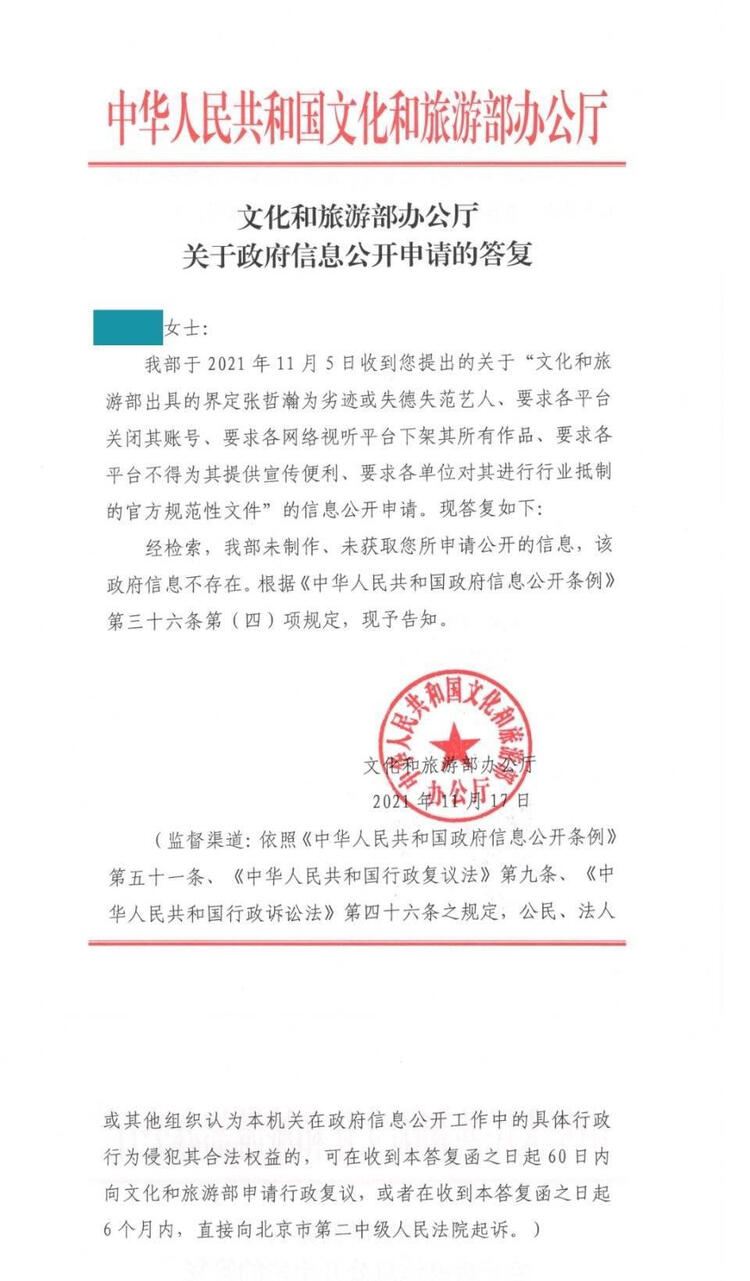 November 23, 2021 - CAPA released their 9th list of artists to be boycotted by the entertainment industry, and Zhang Zhehan was the 88th and last artist on this list. Weibo link 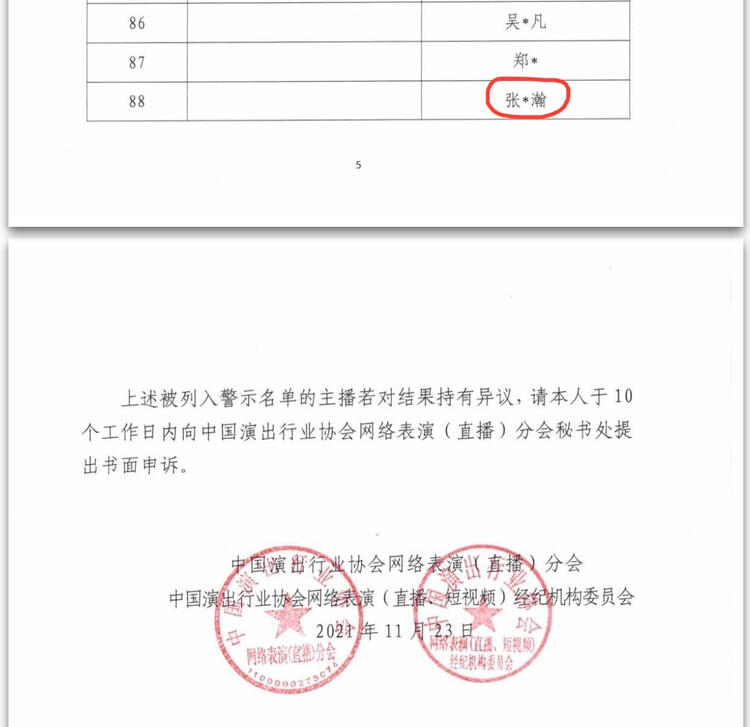 November 23, 2021 - Li Xuezheng, the Vice Chairman of the China TV Artists Association and Director of the Golden Shield Television Center, first posted in Weibo questioning: (1) CAPA’s authority to create a boycott list, especially of artists who are not a member of their association, (2) the members on CAPA’s ethic committee, and (3) the appeal process with CAPA. (Weibo link)He shared an additional post specifically questioning Zhang Zhehan's inclusion in the boycott list. (Weibo link)

December 14, 2021 - MCT did not create any official documents asking platforms to: (1) take down Zhang Zhehan's works, (2) close his accounts, (3) erase positive content and only preserve slander, (4) disallow publicity, (5) take down his fans' works or Weibo posts. They also did not ask CAPA to initiate an industry boycott. link 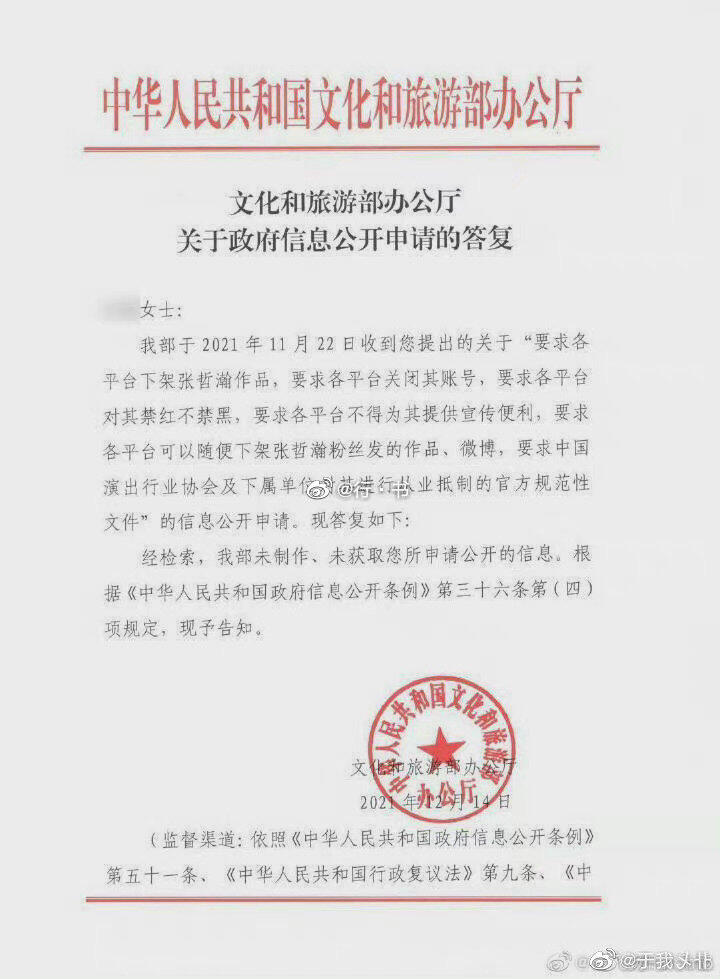 December 14, 2021 - CAPA is an industry organization under the jurisdiction of the MCT; the MCT has not issued any written or verbal instructions to: link(1) request CAPA to classify Zhang Zhehan as a problematic artist,(2) initiate an industry boycott, including asking platforms to:
(a) close his accounts
(b) take down his works
(c) disallow publicity
(d) censor his name, film content, music, voice, or media from content creators(3) disallow posting of any positive content about Zhang Zhehan or his family,(4) disallow Zhang Zhehan's family's legally-established business to promote content online,(5) only allow slander and rumors against Zhang Zhehan and family,(6) disallow clarifications against rumors.

December 22, 2021 - The NRTA responded with NRTA Notice 134. They did not create official documents that: (1) classify Zhang Zhehan as a problematic artist, (2) ask platforms to take down his works, (3) ask platforms to disallow publicity or Zhang Zhehan's ability to speak for himself. link 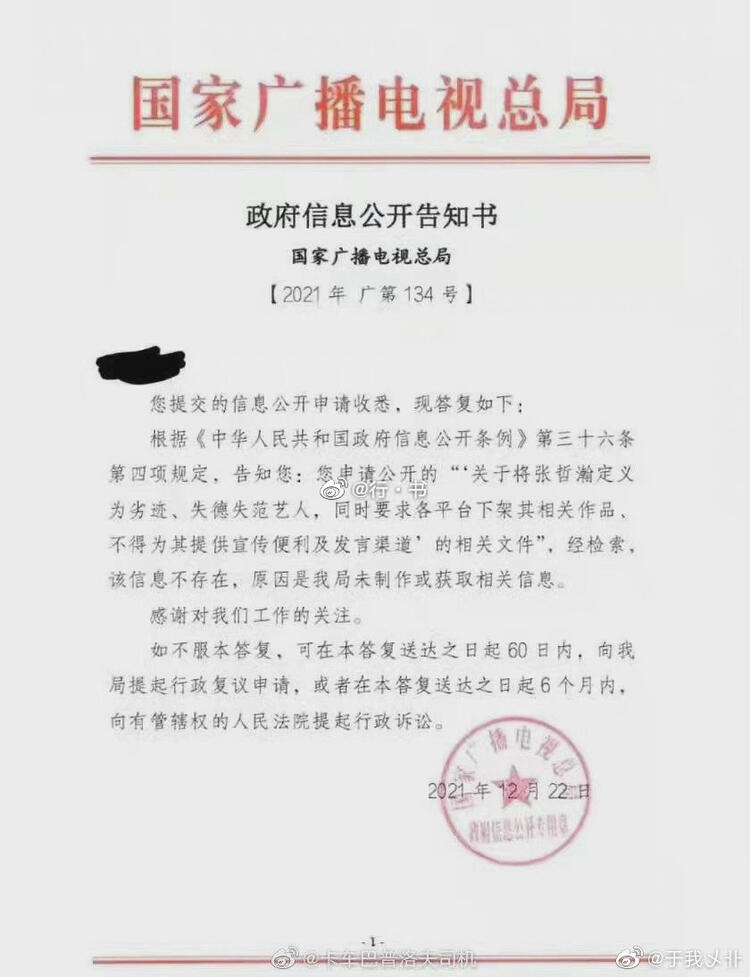 December 22, 2021 - Li Xuezheng shared a Government Information Disclosure Notice from the NRTA [NRTA Notice 137] regarding an inquiry from a citizen asking if they: Weibo link
- Added him [Zhang Zhehan] into immoral entertainers list
- Deplatformed him
- Took down his works
- Took down his products/terminated his sponsorships
- Initiated an industry-wide boycott
- Asked CAPA to release a statement against himThe NRTA stated they did not create official documents (1) classifying Zhang Zhehan as a problematic artist, (2) asking platforms to take down his works, (3) initiating an industry boycott of Zhang Zhehan, (4) asking CAPA to initiate an industry boycott. link 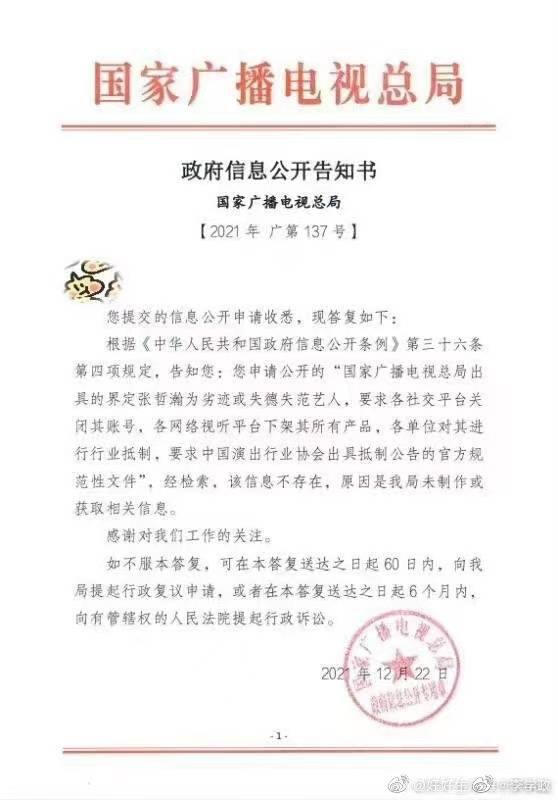 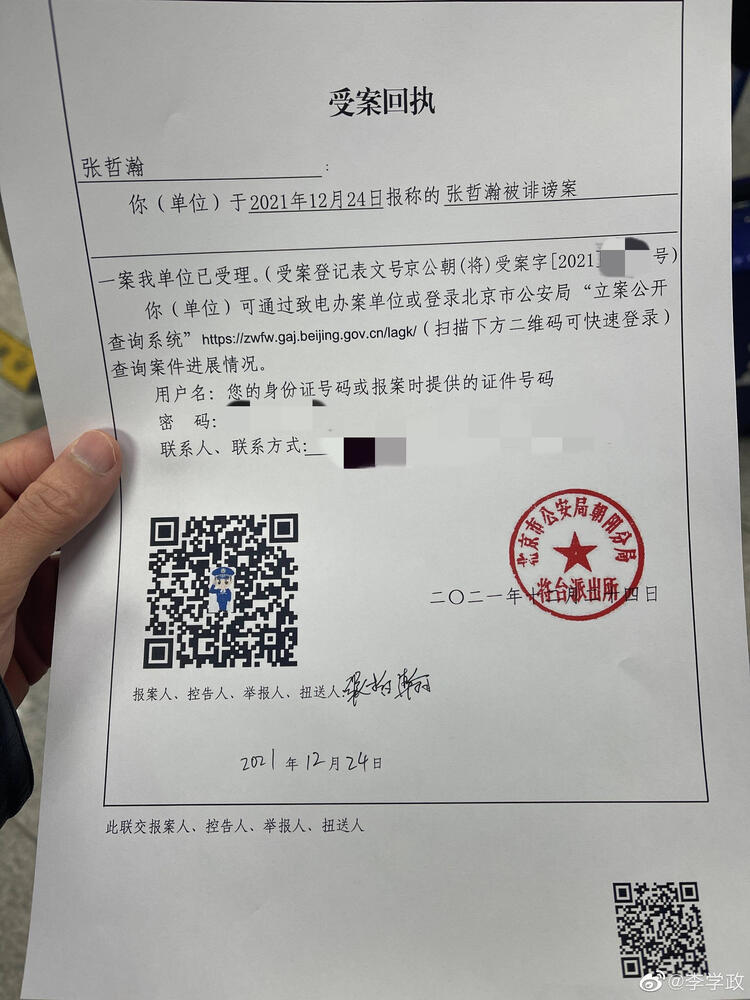 January 20, 2022 - The NRTA responded with a new reply in regards to Zhang Zhehan. [NRTA Notice 178] Weibo link1. Did NRTA grant CAPA the responsibility to release the "Online Streamers Warning List"?
2. Did CAPA submit the list to NRTA for approval before publication?
3. Can CAPA, in association with other corporations, to ban an artist? By not consulting the NRTA and relevant laws?
5. Did NRTA instruct Zhu Kening [president of CAPA] to put Zhang Zhehan on a ban list?
6. Did NRTA produce any list with Zhang Zhehan included in it that would cause his works be taken down and banned?The above questions are not relevant and NRTA would like to remind people that CAPA belongs to the MCT and is not under the purview of the NRTA.4. Did NRTA produce any details document stating that Zhang Zhehan is an immoral artist?7. Did NRTA instruct platforms to prevent Zhang Zhehan's family from operating online stores? Or to ban and delete clarification posts about him?NRTA responded that no relevant documents exists. 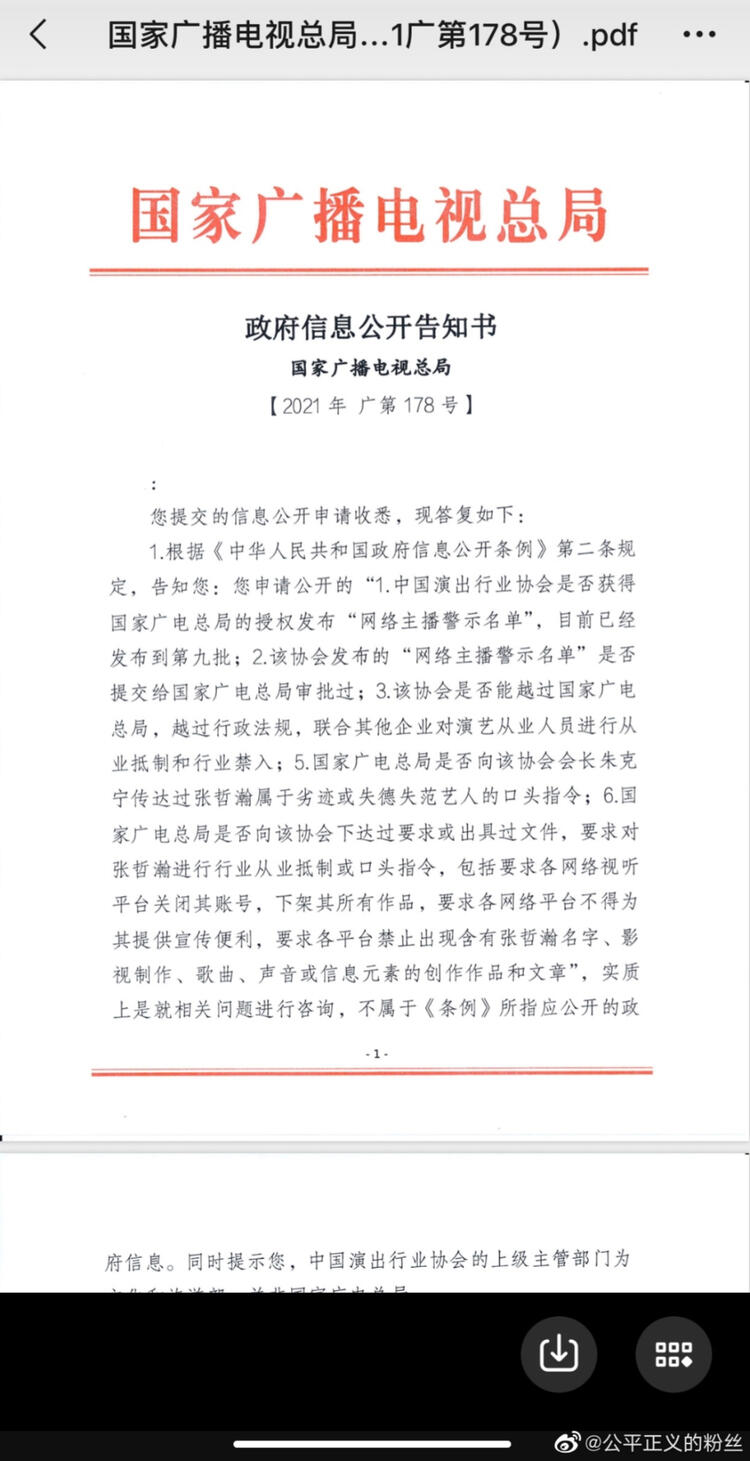 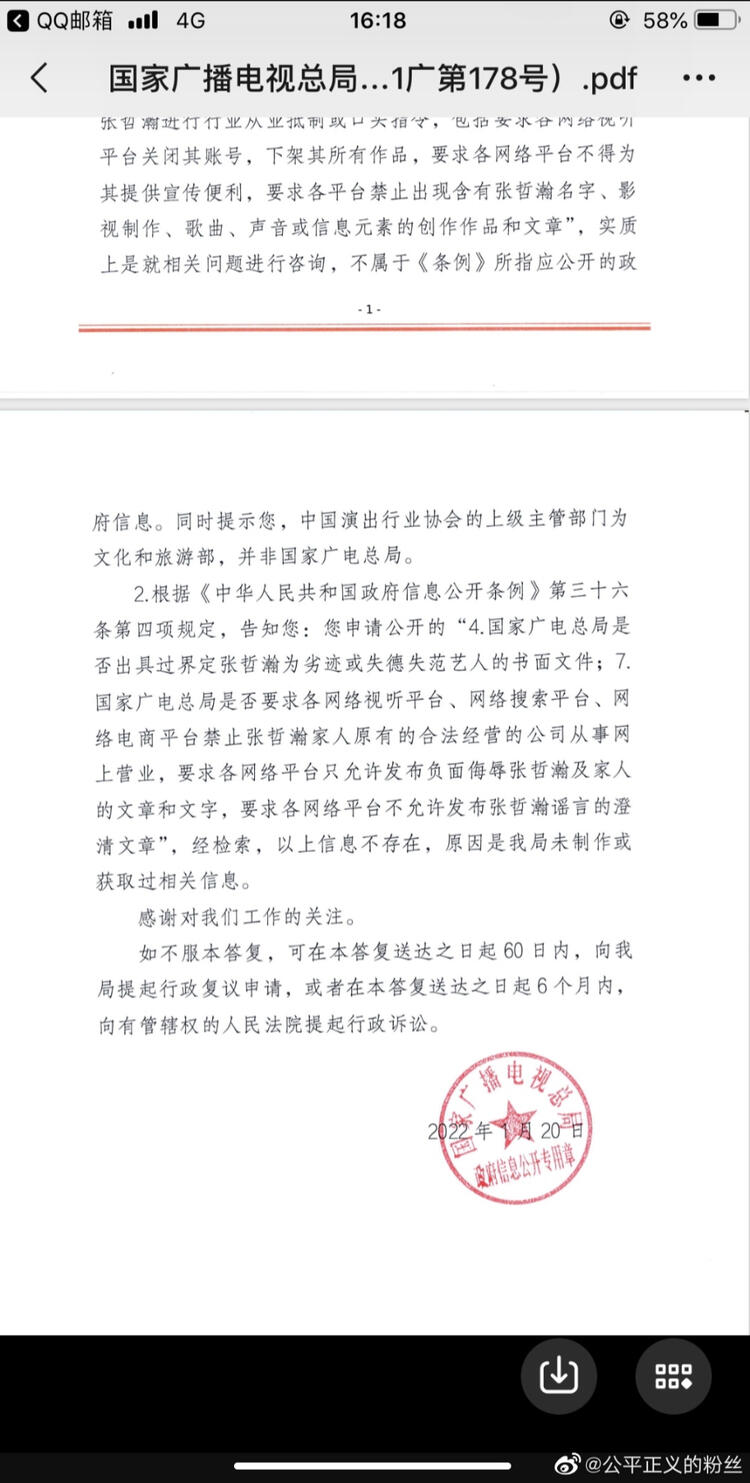 March 18, 2022 - There was a leaked 11-second audio clip of ZZH’s voice, from the content it's suspected to have been recorded at around the same time as his January 1, 2022 audio interview with Li Xuezheng. In another leaked 26-second audio clip, ZZH mentions standing strong and his willingness to fight. Full translation here.